Vanessa Stephen was the eldest daughter of Sir Leslie Stephen and Julia Prinsep Jackson (1846–1895). Her parents lived at 22 Hyde Park Gate, Westminster, London, and Vanessa lived there until 1904. She was educated at home by her parents in languages, mathematics and history, and took drawing lessons from Ebenezer Cook before she attended Sir Arthur Cope's art school in 1896, and then studied painting at the Royal Academy in 1901.

During her childhood, Stephen and her sister Virginia were sexually molested by their half-brothers, George and Gerald Duckworth.

After the deaths of her mother in 1895 and her father in 1904, Vanessa sold 22 Hyde Park Gate and moved to Bloomsbury with Virginia and brothers Thoby (1880–1906) and Adrian (1883–1948), where they met and began socialising with the artists, writers and intellectuals who would come to form the Bloomsbury Group.

She married Clive Bell in 1907 and they had two sons, Julian (who died in 1937 during the Spanish Civil War at the age of 29), and Quentin. The couple had an open marriage, both taking lovers throughout their lives. Vanessa Bell had affairs with art critic Roger Fry and with the painter Duncan Grant, with whom she had a daughter, Angelica in 1918, whom Clive Bell raised as his own child.

Vanessa, Clive, Duncan Grant and Duncan's lover David Garnett moved to the Sussex countryside shortly before the outbreak of First World War, and settled at Charleston Farmhouse near Firle, East Sussex, where she and Grant painted and worked on commissions for the Omega Workshops established by Roger Fry.

She is considered one of the major contributors to British portrait drawing and landscape art in the 20th century.

She is portrayed by Janet McTeer in the 1995 Dora Carrington biopic Carrington, and by Miranda Richardson in the 2002 film The Hours alongside Nicole Kidman as Virginia Woolf. Vanessa Bell is also the subject of Susan Sellers' novel Vanessa and Virginia. 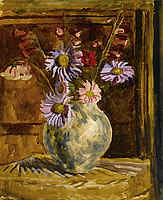 Vanessa Bell
Still life of flowers in a vase