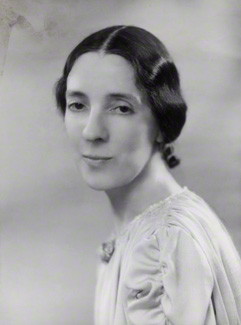 Painter and sculptor, née Bourne in Shrewsbury, Shropshire who became the wife of Charles Wheeler, President of the Royal Academy.

She studied at Wolverhampton School of Art where she met her future husband but after her marriage worked only periodically.
She exhibited once under her maiden name at the RA in 1919 and thereafter under her married name. She also showed at the Royal Birmingham Society of Artists, Glasgow Institute of the Fine Arts, Walker Art Gallery, Liverpool, Leeds City Art Gallery, New English Art Club, Royal Society of Portrait Painters, Royal Institute of Painters in Water Colours, Royal Society of Miniature Painters, Sculptors and Gravers, Royal Institute of Oil Painters and at the Society of Women Artists who elected her a member in 1935.
She was elected an Associate of the RBS in 1942 and a full member in 1946 serving for two years on the Council of that Society. Her sculpture of a mother and child is in Newport Art Gallery and her bust of Charles Wheeler is held by the National Portrait Gallery. 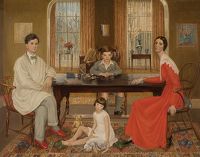 Muriel Wheeler
Self and Family, 1933