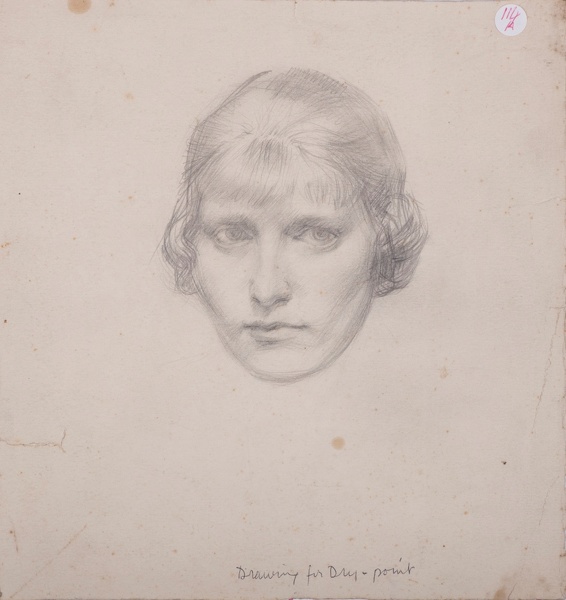 Phyllis Dodd received a Royal Exhibition Scholarship to attend the Royal College of Art (RCA) for four years, from 1921-25, alongside Henry Moore (1898-1986), Raymond Coxon (1896-1997) and Edna Ginesi (1902-2000). In 1924, having achieved her Painting Diploma in two years (rather than three), she embarked on a Scholarship in etching and aquatint, under Frank Short. One of her earliest etchings – The Beret – shows a fellow student, Pindi, the pet name for Kathleen Bridle (1897-1989), who attended the RCA from 1921-25. Bridle went on to work as a glass painter in the Dublin studio of Harry Clarke and became one of the founders of the Ulster Unit in 1934. Frank Short insisted on draughtsmanship of the highest order as a prerequisite for entry to his course but this offered no barrier to Dodd, who in her fourth and final year won the drawing prize in the School of Painting. A confident self-portrait, dating to 1925, shows how well she mastered etching. The surviving drawing for the drypoint shows the process by which an image was first conceived on paper and then engraved on to the copper plate, which when printed appears in reverse. Unfortunately, she produced no more prints after leaving college despite Short’s advice that she should concentrate on etching portraits because she was so fluently skilled in these. It was good advice at the time, but after the Wall Street crash, interest in this medium collapsed and never really recovered. 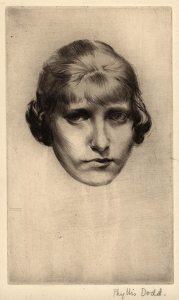 A proof copy of the artist's drypoint self-portrait