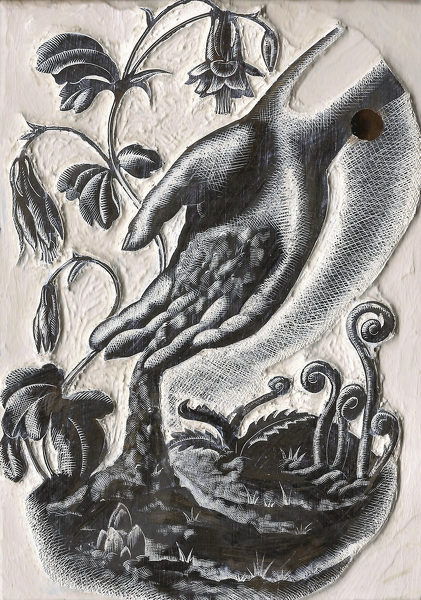 The Magic of Handling Earth was published in Elsie Syminton's By Light of Sun, in 1941, an account of establishing a garden in America by a transplanted Englishwoman. Leighton herself moved to America in 1939 and became a naturalised citizen in 1945.

A talk given shortly after the end of the Second World War, perhaps in 1946 or 1947. Clare had had a passionate horror of war ever since burying the stained and tattered uniform of her brother Roland who died of wounds on the western front in 1915. Her comments below, though inspired by the Second World War, retain their significance today.

An eighty-year-old friend of mine down in North Carolina who is something of a homespun philosopher remarked: “There's a whole heap of things we can begin to see to, when the war done ceases more”. He saw the ending of war as a gradual process, not one joyful event. This set me thinking that wars do not necessarily end when the fighting stops; the world that made it possible may still be with us. I realized that the difference between war and peace today is not a matter of black and white, it is a gradualism. And so, when I try to talk to you about the artist's place in the world today, I am talking about a world that is still blurred by war. War does not cease with the end of the killing; the state of war in our minds endures. And it is a more complicated, subtly dangerous state perhaps than the war itself. It is charged with potential danger, more confusion and chaos.

A lot of people were frightened of the end of the war; of its challenge. That is where the artist must come in.

I am talking of the artist and his relationship to life. The artist is above race, creed, class and so on, for visual art, like music, can be

understood by the entire world. And the artist has never been more important. I believe that in Buddhist ethics, one of the deadly sins is a lack of awareness. The artist's task is to re- awaken awareness, to re-sensitise it. War produces an emotional deadness: once, a distant massacre or a faraway earthquake moved us to righteous indignation. Now, here in America, the whole of Europe might starve and we would hardly be aware of it. There is a cataract over the eyes of the spirit. The artist must be the quickener of the world; we have seen the death of tenderness. As E.M.Forster put it, “we must not let ourselves be numbed by horrors”.

What were we fighting for? For freedom. Freedom to live fully, which means to create our own symbols of freedom and pass them on to others; to allow for a new set of experiences and a new capacity for them.

We are on the edge of a new civilisation and it is up to us to shape it. As the twig is bent, the tree will grow. It is a tender, young civilisation scarcely born, and it can be shaped in materialism or into the things of the mind and spirit. We artists have a strange sense of hurry - hurry before it is too late; hurry before the world has taken hold of its new values based on “things”. I have noticed this in many of my fellows. Nylon stockings are not worth our men having died; nor are motor cars. Nor refrigerators, nor limitless gasoline nor vacations in Florida. We owe a debt to our dead. This can only be paid in the slightest degree by creating a new world. This means a really new world, not one with its old values. I can now speak as an American, being a self- elected immigrant and taking out my papers. We run the risk of being a defeated country, for we are putting our faith in things. Apart from our mental values, we must reconstruct the world's symbols which we have had to tear down: Monte Cassino, the Mantegna paintings at Padua; the churches, buildings and libraries. We must slave to rebuild, so that there is as little guilt as possible; so that this age in the eyes of posterity may not be looked on as an age of the ravager and the destroyer. The beneficent influences throughout the world are Mozart, Hans Andersen and the like - not the big bankers and the automobile manufacturers. We must add our weight to the spiritual side of the balance. There is no time to lose, for we are drifting into fear and chaos.

Chaos! We need a sense of order, of benign order as represented by the seasons, the earth, the art of the Bach fugue. The human being needs benign discipline - we may find it in authoritarian, democratic, or religious form, or in awareness of the arts, but always we need something of ordered creativity. We need order in architecture. This state of mind of happy order is the best guard against

anarchy and totalitarianism. It is better than armies. Our men are coming home. A friend declared that he had put his soul on ice for the duration of the war. Order is needed to fill their empty hands that have grown accustomed to bombs and planes; we dare not let them stay empty.

In rebuilding our world we need something of the spirit to balance this mechanised age. Mankind is not yet adjusted to wholesale mechanisation. Our spirit is lonely. We are still the mute inactive scared creator. There has been anonymous art from the beginning of mankind; there is a creative urge in us all. It must have an outlet. This is the way to make a world in which peace is a vital, enduring thing, and not a mere negation of the state of war.

We are grateful to David Leighton for allowing the use of the above text - an extract from Clare Leighton, The growth and shaping of an artist-writer, p .47-48), published by The Estate of Clare Leighton, 2009