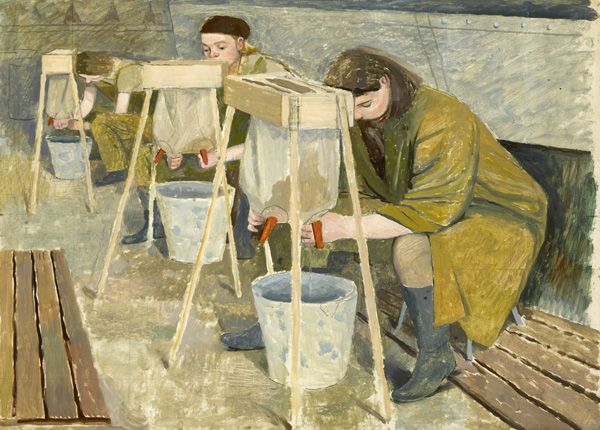 In May 1940, Evelyn Dunbar, the only woman to receive a full-time salary from the War Artists’ Advisory Committee (WAAC), was posted to Sparsholt Farm Institute, near Winchester, to paint Women’s Land Army recruits in training. Painted around the time Dunbar was considering how to illustrate A Book of Farmcraft, her painting Milking Practice with Artificial Udders (see overleaf) shows three novice Land Girls, struggling to learn the rudiments of milking. The Land Girl in the middle has assumed the recommended posture. The painting is squared for transfer – it is a study for the nearly identical finished painting in the Imperial War Museum.

In Study for Women’s Land Army Dairy Training, operations have moved from artificial to real. Dunbar’s perspective lines lead the viewer to the dairy wash-house beyond, itself the setting for Milking Practice with Artificial Udders. The extensive colour notes would have served as an aide-memoire to guide her when she returned to her studio in Rochester to work the sketch up. However, Dunbar appears to have never completed this composition and she later used the same title Women’s Land Army Dairy Training for a different WAAC commission. By September 1943, a quarter of the 80,000-strong Women’s Land Army were involved in milking.