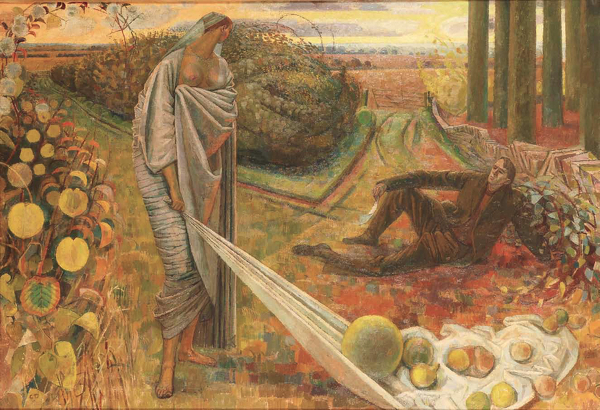 Literature: Gill Clarke, Evelyn Dunbar War & Country, Sansom & Co,
Bristol, 2007, p.152; Evelyn Dunbar - The Lost Works, Sacha Llewellyn & Paul Liss, July 2015, cat 114, page 162-163.
Autumn and the Poet, Dunbar’s last allegorical painting, was begun in Oxfordshire in 1948/9 then laid aside for some years before completion in 1958-60. In the form
of a traditional Annunciation, the fruit-laden but moribund figure of Autumn is urging the Poet (who closely resembles Roger Folley) to disseminate truths about the
essential synergy between man and creation, without which mankind cannot survive.
Evelyn Dunbar’s final completed work Autumn and the Poet was also her greatest and most significant allegorical work, a version of which she had begun in the late 1940s when living in Enstone, Oxford. It was finished in her studio at Staple Farm, near Wye, Kent during 1958-59 having absorbed her intermittently for the past 10 years or so. The two figures symbolise “Autumn and the Poet”; Dunbar used her husband Roger Folley as her model for the poet as she had particularly wanted him in that angular pose.
In Autumn and the Poet Dunbar’s use of colour is especially noteworthy. The mellow colours from palest gold to the deep, rich copper, purple and red coupled with the feeling of autumn glow as the light begins to fade are emblematic of a spiritual presence and sensibility.
Post War
"At the end of the war, Dunbar was still only 38 years old. Married in 1942 to Roger Folley, she was able to spend time with him at last, setting up home firstly in Warwickshire, thenin Oxfordshire, finally in Kent. In a manner similar to Stanley Spencer, to whose work her Joseph’s Dream (FIG 21) was not unexpectedly compared, she had worked in a personal and mystical mode as well as in a more objective observational one. Dunbar’s Portrait of a Retired Schoolmistress (CAT 110) is compelling in its directness, with the sitter’s determined gaze, solid figure and floral patterned overall. The black line between the shoulders forms the base for an equilateral triangle to the crown of the head. Her self-portrait (CAT 113) has the quality found in some of Spencer’s of being caught off guard in the act of painting, as the awkward positioning of the legs seems to suggest.
In Flying Applepickers (CAT 107), the theme of levitation, used at Brockley in the
soffits of the balcony, returns. Is it a metaphor of liberation after the years of pre-war
unhappiness in love, followed by the privations and war? No doubt this theme of
weightless bodies emanates from the spiritual seeking of a Christian Scientist, but it
is also delightfully comic, with more tenderness than is found in most of Spencer’s
comparable works of supernatural events in Cookham High Street. Such compositions
were falling out of fashion in the post-war world, but this did not prevent Dunbar from
working on a series of allegorical and deliberately mysterious paintings that continue
the pastoral romantic tradition in which she was trained, as her companion painter at
Brockley, Mildred Eldridge, was to do with her cycle, The Dance of Life, painted for
the Orthopaedic Hospital at Gobowen in the Welsh Marches. They shared a belief that
humans are most complete when close to the rhythms of the natural world, to which
Eldridge brought a more mistrustful view of ‘civilisation’. These are themes of urgent
contemporary relevance and far from sentimental.
Several of Dunbar’s major late works remain to be relocated and revealed. Autumn
and the Poet (CAT 114) has the look of a post-war painting in its brushwork and slightly distorted drawing (with a hint of John Minton, perhaps), which pulls away from the more purely classical pre-war works. The iconography of poet and his fecund pin-headed muse, characterized as a season but more representative of nature as a whole, continues the celebratory quality of Dunbar’s painting of the numinous landscape as shaped by man, very different from Minton’s more sinister evocations. Lines in the composition tie the surface together in a root two rectangle, while leading the eye into the distance by a double perspective.
Dunbar’s last mural commission, Alpha and Omega (CAT 111), painted for the library
at Bletchley Park Training College, fortunately survives, although not in situ. The many studies that came with the two paintings to Oxford Brookes University show Dunbar’s range of experiment in finding an appropriate iconography for a modern dress allegory.
Both panels have the unforced otherworldly quality that Dunbar found early on and
which stayed with her to the sadly early end."
Alan Powers