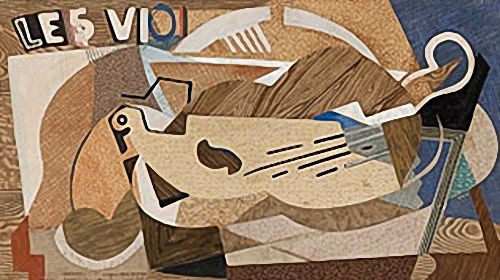 The use of collage as fine rather than decorative art was one of the most significant innovations of the twentieth century. Dobrée was one of its most talented practitioners in Britain during the late 1920s and early 1930's. Herbert Read, whose collection included work by Dobrée, was amongst her admirers. Most of the thirty-four works shown in her pivotal Claridge Gallery show of 1931 remain untraced. The art critic of The Times reviewed this work in the following terms:

'Her designs, mostly cut out of patterned wallpapers, are definitely and very intelligently "cubist".  Indeed the first response to them is the feeling that here at last is the proper application of an artistic formula that is never quite satisfactory in painting. The chief attraction is in colour,  Mrs Dobrée producing enchanting effects in the schemes of grey-blue and buff. There is a lively invention in the designs, and they are carried out with the most subtle logic in tone relation and a happy use of textures.' (9 Dec. 1931)

We are grateful to Hilary Diaper for her assistance.