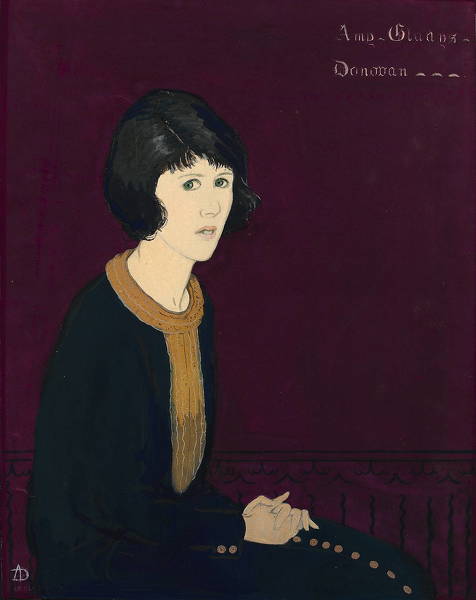 First looked at her online, late at night, entranced first of all by the buttons. Two on the cuff of the visible sleeve and another eight on her dress, leading away from her convoluted hands, down from her knees to the invisible floor of the balcony on which she sits. The buttons are the same colour as the shawl collar of the garment, and they form a defining line. So, I called her ‘Girl with Buttons’ until she was with me, so to speak, and I saw so much more.

Here is Amy Gladys Donovan, defining herself with her signature in script in the top right-hand corner and her elaborate AD at the bottom left. “This is ME”, she seems to be saying. “This is Amy.”

We have a three-quarter profile, featuring an interesting, long face with artful black hair, mouth slightly open. Rather lovely and shy, an ingénue with a touch of ferocity, innocence and resistance. The colours are controlled. Scant knowledge of her life indicates that her military father did not approve of her career in art. Is that the balcony behind, and has it anything to do with all those buttons?

She sits not centre stage, but left of. Amy Donovan, uncertain, with anxious, convoluted hands, knew what to do with the space surrounding herself. (My own definition of design.) She is wonderfully designed, utterly personal, vulnerable and powerful.

Commentary by Frances Fyfield, a one-time criminal lawyer, who went on to write twenty-four crime novels, some of which reflect a lifelong passion for undervalued British art. She has won several awards for her writing and is the presenter of the Radio 4 series Tales from the Stave.