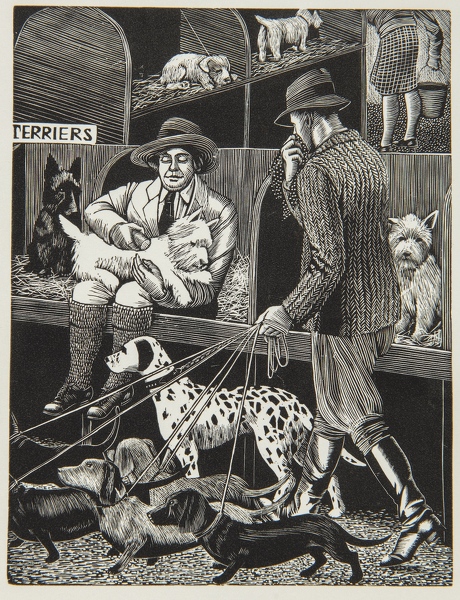 
Original engraving on boxwood, printed from the blocks in an edition of 500 copies on 225gsm Zerkall mould-made paper by Ian Mortimer at I.M. Imprimit., circa 1989

This engraving and The Crocodile were commissioned in 1929 by Oliver Simon for a projected but never completed calendar to have been published by the Curwen Press.

In 1925, at the age of 17, Tirzah Garwood enrolled at Eastbourne School of Art, where, under the instruction of her young tutor, Eric Ravilious, (whom she would marry five years later), she excelled in wood engraving. Her satirical scenes of bourgeois life in 1920’s Britain explored themes such as bathers on Eastbourne beach, window cleaners and plump ladies shopping in Kensington. By 1927, she was already exhibiting and attracting attention for her work, and received prestigious commissions from the BBC and the Curwen Press. The Crocodile and The Dog Show were commissioned in 1929 by Oliver Simon for a projected but never completed calendar to have been published by the Curwen Press. Both engravings, however, were shown at the English Wood Engraving Society’s 1929 exhibition to critical acclaim. The Queen (25th December 1929) compared ‘the puckish humour’ of Garwood’s work to that of Honoré-Victorin Daumier, describing The Dog Show as ‘wicked’ and The Crocodile as ‘that amusing bit of observation’, while Apollo (January 1930) wrote, ‘Miss Tirzah Garwood is, as one expects it of her by now, intensely amusing, especially in The Dog Show’.