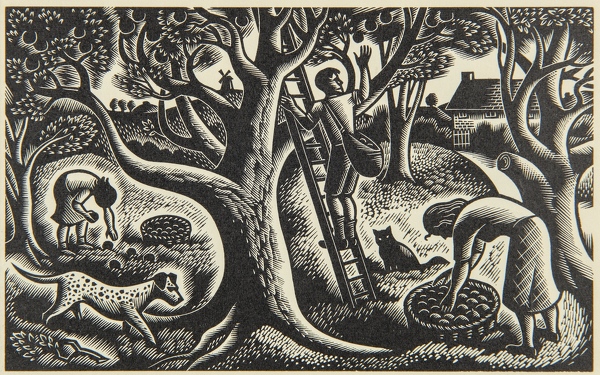 Apple Picking was printed from the original block by the Whittington Press, in 1985, the original having been first issued in 1952.  After studying Goldsmiths' College of Art in London from 1926, from 1930 she attended the Grosvenor School of Modern Art where she was taught and strongly influenced by  Iain Macnab.  The Grosvenor School was a progressive art school, and the championing of wood engraving and linocuts fitted with its democratic approach to the arts.The main body of her work drew upon the landscape and buildings around Petworth and the neighbouring South Downs. Her work was inspired by that of Iain Macnab, Percy Douglas Bliss and the Sussex-bred Eric Ravilious

Throughout the Second World War she worked in the Women's Land Army just outside Petworth. Her record of those years was published by the Whittington Press in 2002 as The Diary of a Land Girl, 1939-1945. It is a poignant record of the determination to carry on whatever the weather or wartime deprivations.

Her prints are held in the collections of the Victoria and Albert Museum and the British Museum in London, the Ashmolean Museum in Oxford, and the Fitzwilliam Museum in Cambridge, among others.

We are grateful to Fishink for assitance.