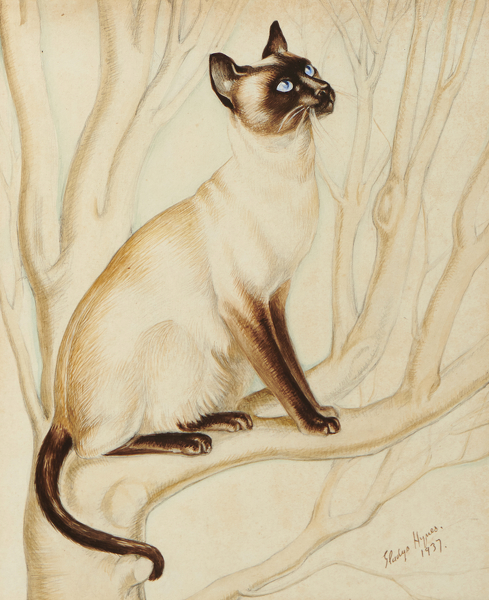 Although fifteen years separate The Railway Carriage and Siamese Cat, Gladys Hynes’ interest in a Vorticist- inflected aesthetic – jagged, rhythmical and linear – which she first embraced in 1919, energizes both works. Before the First World War, Hynes had been part of a thriving second-generation of Newlyn painters, along with Laura Knight and Dod Procter, producing a striking body of work inspired by Cornwall’s pools and rocks, cliff tops and ocean views. In 1919 she moved to London, taking lodgings in South Hampstead with the poet John Rodker, whose Ovid press was publishing graphic work by former members of the Vorticist group. In 1927, Hynes received what was to be the most important commission of her career, to illustrate a folio edition of Ezra Pound’s Cantos 17–27, published by Rodker. Under this influence, and revelling in her new independence as an observer of the urban scene, Hynes’ pictures evolved noticeably towards a more modern aesthetic and subject-matter, a stylistic change that affronted the Daily Mail’s critic, who in 1922 lamented that she ‘has turned away from all that is beautiful and soulful’.