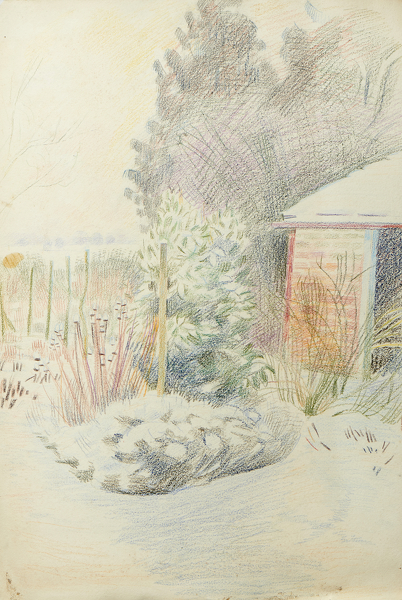 Hover over the painting to magnify (there may be an initial delay while the magnified image is loaded)
£1,850
Free shipping
Enquire

Evelyn Dunbar very rarely used crayon. This study shows the garden at The Elms, the house between Ashford and Wye in which she and Roger Folley lived 1950-57. It’s under snow, which probably dates it to the winter of 1956-7, and she has used crayon partly because crayon is quick, partly because the paper does its own work in the depiction of snow and partly because of the obvious disadvantages of using water colour in near- or sub-zero temperatures. The shed is the last of a row of three or four brick garden sheds used for the usual garden tools and equipment and bicycles, and one of these sheds, maybe even the one Evelyn has drawn, housed the skis which they occasionally used in snowy weather on the slopes in the field opposite the front of the house, though their serious skiing took them to the French Alps or the Dolomites. The upright stakes on the left are Roger’s, used for loganberries.

We are grateful to Christopher Campbell-Howes for the above information.